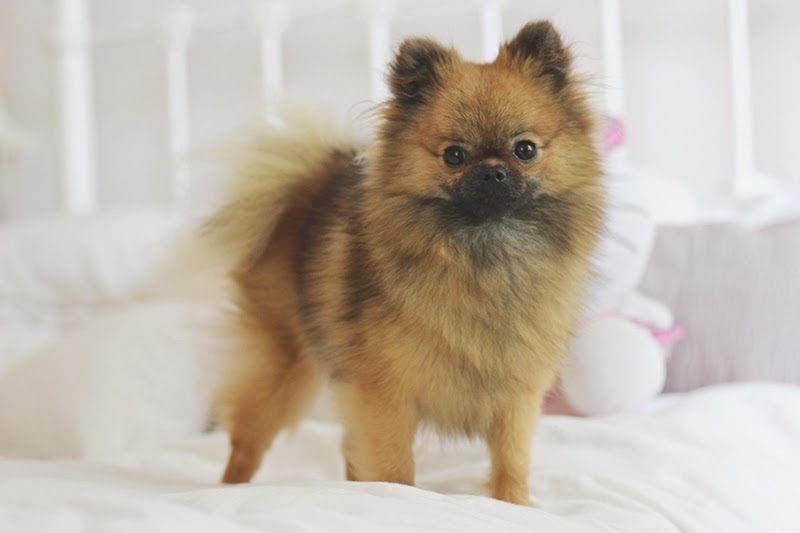 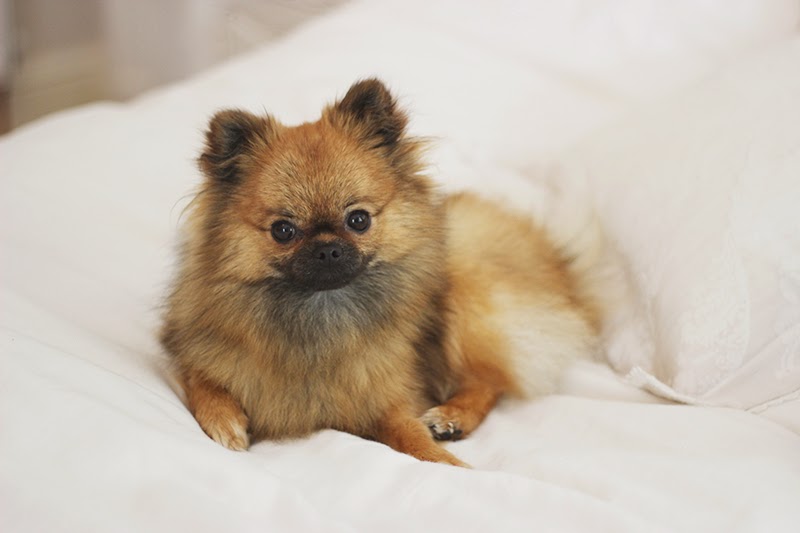 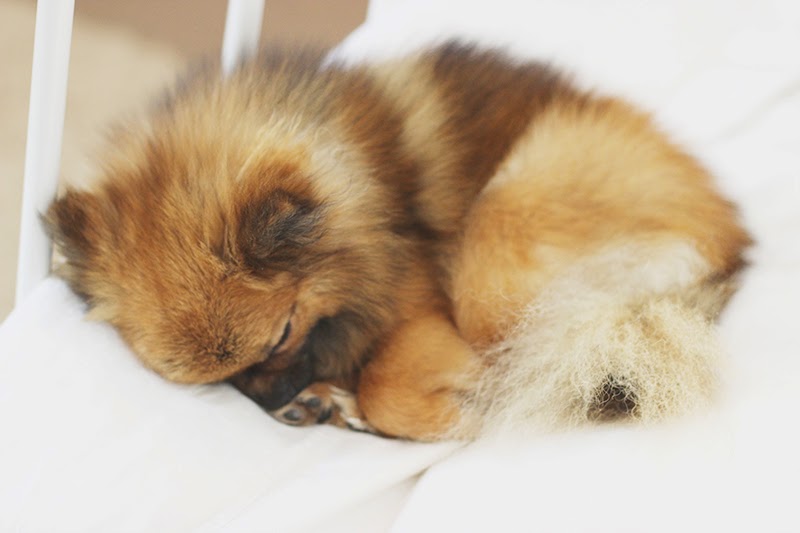 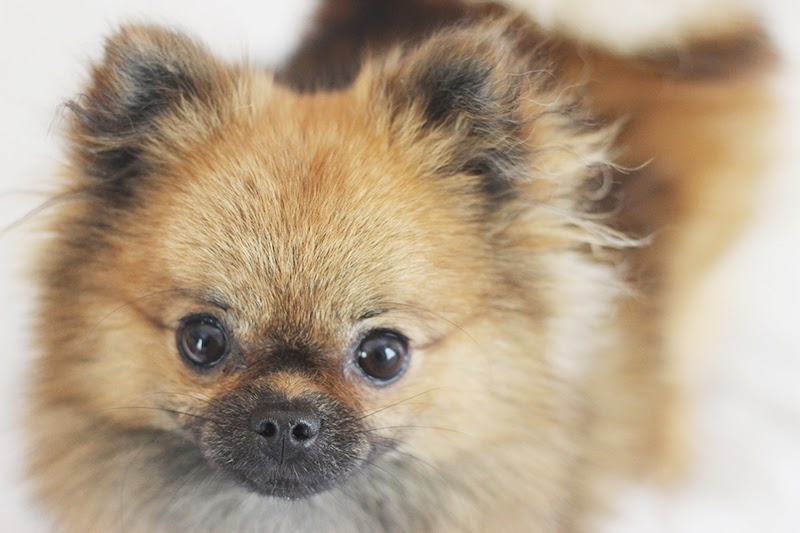 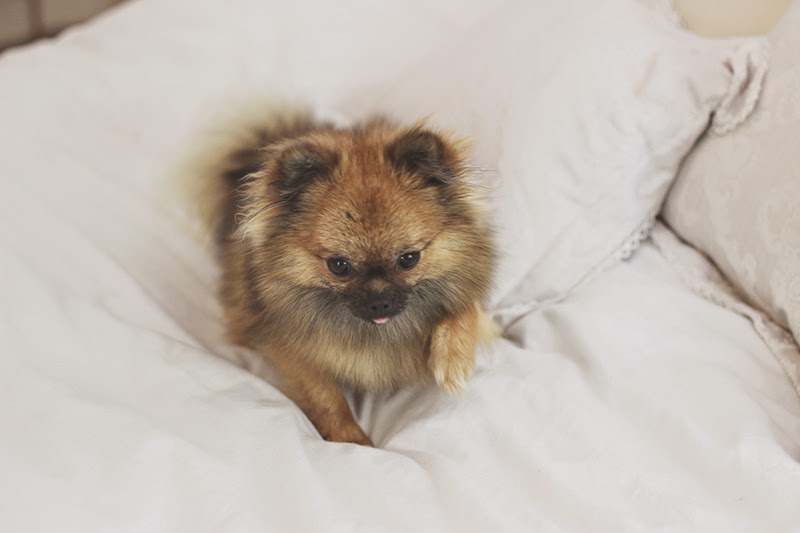 I hope you all appreciate the cuteness of these photos! I realised the other day that I’ve never really spoken about my dog, Pom, on my blog. Seeing as it’s just been the one year anniversary of having her I thought I’d fill you all in a little bit about her!
From watching countless amounts of Boo Dog videos online to searching the ‘#Pomstagram” tag on Instagram, I’d been wanting a pomeranian for years. My mum brought her home as a complete surprise.  Let’s just say, if she’d filmed my reaction it probably would’ve gone viral. It was like surprising a 7 year old that she’s going to Disneyland. Except I probably cried and squealed more…
I think people have this idea that small dogs aren’t a lot of hassle and are easy to own. Just because they’re tiny does not make them effort free! When we first got Pom she was so tiny that I was constantly scared of losing her and she had a tendency to shoot off at any given opportunity. Pomeranians are also an extremely stubborn breed and it was tough training her. It took months for her to learn her own name and she used to run off at any given opportunity. Toilet training took a long time and it was difficult to get her to eat. When I let her out at night, I was terrified she’d shoot off underneath a bush.  We had to turn the garden into a makeshift prison with planks of wood all around to cover any potential escape routes. Even now, if you’re not watching her outside, she might shoot off down a road.
As for naming her, I settled on the most unoriginal thing ever, but trust me, Pom suits her. She’s always had such a strong personality so cutesy toy dog names like ‘Honey’ or ‘Boo Boo’ just didn’t make the cut. Pom just stuck and most of my family still refer to her as ‘The Pom’ like she’s still waiting for a name.  As she’s got older, she’s become a lot easier to look after, but it’s important to be realistic if you buy a tiny dog like Pom. I read somewhere that pomeranians tend to take on the characteristics of their owners and a lot of my friends joke that she’s literally me in dog form so I guess there’s some truth in that. She needs a lot of sleep, and sighs if I get up during the night, and she definitely has a little princess vibe.
Pomeranians are known for their extroverted personalities and Pom is no different. She was socialised well and will happily be picked up and cuddled by anyone. She’s super loving and playful, not snappy or yappy or any of the common misconceptions about small dogs. In the beginning she had a bit of a problem with playful (painless) biting, but again, this goes away as they get older. They’re also really energetic dogs and Pom loves to be taken for walks. But she doesn’t *need* to be walked daily like larger dogs, so for this reason they’re perfect for busy people. I thought about taking her to Uni with me this year but it’s so cruel for her to not have a garden. She’ll roam around outside for hours and you can take her for long walks.
Finally, the last main thing about owning a miniature pomeranian is how careful you have to be. Whenever I take her anywhere, she wears a little harness because you have to be extremely careful not to hurt her. If you put a lead on a pomeranian it would snap her neck, so you have to be super gentle with them. It’s also easy for them to pop joints and break bones due to their size, so that’s another thing to bare in mind if you buy a small dog. She’s a great little guard dog but also has small dog syndrome where she’ll try to take on larger dogs and even cows. For this reason on a walk I tend to simply pick her up around other dogs else she can get pretty wound up.

So that’s Pom in a nut shell! If you have any questions about her don’t be afraid to ask and I’ll answer as well as I can!